The Test of Gold by Renee Yancy 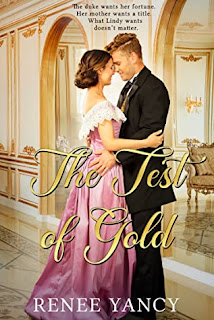 Welcome to my blog, Renee! It's a pleasure to have you here.

Could you please give us some background information about The Test of Gold and what inspired it?

The true story of Consuelo Vanderbilt inspired my new historical romance, The Test of Gold. Consuelo was a "Dollar Princess," the nickname coined for heiresses in the late 20th century who possessed multi-million dollar dowries and married cash-poor British and French aristocrats.

The Gilded Age occurred after the American Civil War, from 1870 to the early 1900s, a turbulent time of rapid economic growth in America. Captains of industry such as Henry Ford, Andrew Carnegie, Cornelius Vanderbilt, and John D. Rockefeller amassed huge fortunes, but were considered nouveau riche by the patrician bluebloods of New York City. The exclusive list of people who could comfortably fit into the ballroom of the queen of high society, Caroline Astor, was called the famous “400.”

Social climber Alva Vanderbilt craved entrance into the 400, and schemed exactly how to achieve it. First, she built an extravagant “chateau” with one hundred and fifty rooms at 660 Fifth Avenue. Nothing like this had ever been seen before. Then she planned a huge costume ball, the cost of which by today’s standard was $6,000,000!

During the Gilded Age, European aristocrats flooded New York City to find a wealthy bride whose dowries could shore up their crumbling ancestral estates, trading titles for dowries. Have cash, will marry! Consuelo's mother, our infamous Alva Vanderbilt, forced her daughter at the tender age of eighteen to marry the Duke of Marlborough to obtain a royal title for the Vanderbilt name.

It was a loveless marriage, and in time, Consuelo escaped it and achieved personal happiness with Jacques Balsan, a French aviator and industrialist.

For my research, I explored some amazing estates of the rich and famous, read books about the etiquette of that time, and studied the fabulous gowns of Charles Worth, who was the premier Paris designer of the Gilded Age. I searched out the jewelry designs of Tiffany, Cartier, and Marcus & Co. Such fun and so beautiful to look at!

Doing the research took me into an era of incredible wealth and shocking poverty the likes of which will never be seen again.

My character, Lindy, has a happier ending!

Raised in the shadow of a mother who defied convention, but won’t allow her own daughter the right to make the same choices, heiress Evangeline Lindenmayer has been groomed since childhood to marry into the British aristocracy.

When Lindy challenges her mother’s long-laid plans by falling in love with a poor seminary student, the explosion is bigger than the Brooklyn Bridge fireworks on Independence Day.

What a lovely, sweet romance! The plot twists and turns in such an unpredictable manner that I read on at a rapid pace, anxiously hoping for Lindy and Jack to find a way to be together.

Lindy's narcissistic mother creates enormous problems for the couple. She doesn't brook having her will crossed, and her ambitious plans for Lindy throw many obstacles in her path.

I was shocked at the extravagance of the times, and I see now why this period in American history was called the Gilded Age. All that glitters isn't gold, however, and the high concentration of wealth in certain areas of society was only a patina, a thin shiny layer on the surface of something far less salubrious. It was eye-opening and saddening to read about the suffering of the less fortunate members of society at this time.

Although there are some serious elements to this story, the writing has a lightness of touch, which I appreciated. I particularly enjoyed the end of the book, which was both poignant and amusing at the same time.

I highly recommend this novel to lovers of sweet historical romance, who enjoy an inspirational flavour to their reading.